Jagex Featured Clan
Many clans fail each year. This was not one of them.
In fact, this clan has been featured on the
Official Runescape Clan Blog .

Featured Clan [History]
July 2010
Many clans fail each year. This was not one of them.
In fact, this page was so well written, it had to be featured on the Main page. 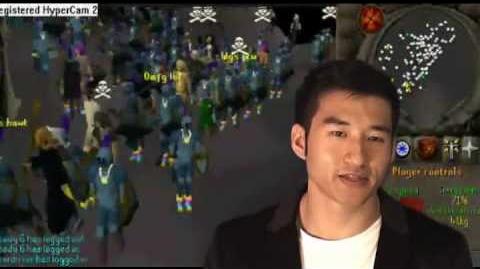 The Wilderness Guardians (Shortened to WildGuard, initialised WG) is a clan founded by His Lordship in 2003. The name "Wilderness Guardians" originally represented the clan's focus of protecting non-PKers in the Wilderness; today it represents the protection of the old ways of honour[1]. In the many years of it's existence, WG (or WildGuard) has become one of the most renowed RuneScape clans, noteably for their revolutionary and impressive feats and accomplishments. WG has hosted multiple real-life meetings, has for sale a clan t-shirt, owns one of the best websites of any clan in any game online, and much more which gives the clan its uniqueness. One of the most prominent features is WG's endorsement by Jagex, the creators of RuneScape. WG has also been a strong influential force and has changed the face of RuneScape and its clan world over the years, both directly and indirectly. In 2007, it was widely agreed that WildGuard was the #3 P2P multi clan, under Damage Incorporated and RuneScape Dinasty.

WG remains one of the ten oldest surviving clans active in RuneScape to date[2]. His Lordship is recognised as the oldest clan leader serving a consecutive term in the rank. The clan has a steady amount of around fifty to sixty active members[3], and a strong community between them. WG is still an active P2P multi clan, hosting at least three official PKing trips (Known as "Raids") per week, and at least one full-scale war per month, as well as keeping a balance with skilling and fun events. WG is ranked #9 on the Tip.It War Rankings[4].

WildGuard was started by His Lordship on December 6th, 2003[5], following his post on the Rune Village fansite's forums entitled "Read This If You Hate PKers". The clan, originally known as "The PK PKs" was based around the concept of Anti-Player Killing, or APKing (See "Advocates"). The idea received an incredible response from the community, with at least 30 members joining within 2 days of opening, some sources saying 60-70. Along with a name change to the Wilderness Guardians, they gained the support of The Sabres (One of only two surviving pre-RuneScape clans and the strongest APKing clan at the time) and joined the Federation on December 19th - a syndicate of clans who shared honour-based principles.

Over the years, WG has caused, shared and experienced far too much to be written briefly. The clan is one of, if not the most influential RuneScape clan ever to have existed. WG has triumphantly recovered from near death, its members have shaken hands in 5 continents around the world, and the clan has been on the cutting edge to the extent that almost every serious clanner knows of the Wilderness Guardians. Three accounts of WG's history have been written and are constantly updated - a basic, a condensed and an extended version. All three of these accounts appear on WG's official website.

Community content is available under CC-BY-SA unless otherwise noted.
Advertisement