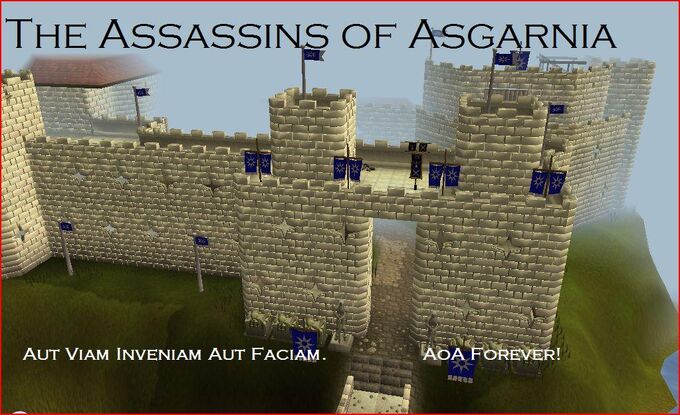 Welcome to the Official Wiki Page of The Assassins of Asgarnia (AoA). We are an Assassin themed POC/Community clan founded by the player EdgeAssassin on August 22nd, 2010. Since our formation, we have made rapid advancements in our clan's infrastructure, government, community, and memberbase, and continue to do so on a daily basis. We are a F2P and P2P clan, which means all players are accepted so long as they meet our recruitment criteria. We are a family. We work, play, kill, chat, and live together. From events to parties there is always something going on in our clan. Our clan chat is never empty, and there is always someone who will chat. Events are held on a weekly basis, and can be found on the clan's Private Forums and Official RuneScape Thread. If you are interested in joining the order, please fill out the application on our Offiical RuneScape Thread found on post 1.1. A clan mate ranked Sergeant or above will review your application, and determine if you fit our recruitment guidelines and accept/decline your application accordingly.

We hope to see you in game, future Assassin!

Duties, Rights, and Powers of The Granmaestro:

Duties, Rights, and Powers of The Obscurus Assassino:

Duties, Rights, and Powers of The Mors Assassino:

How To Obtain Rank: Chosen by vote of higher ranked mates.

Duties, Rights, and Powers of The Arbiter Assassino:

How To Obtain Rank: Delegated by guildmates, then passed to the council for a vote. Only three votes needed to deem worthiness for position.

Duties, Rights, and Powers of The Praetorus Assassino:

How To Obtain Rank: The Nox Assassino rank is considered the "placeholder" rank for previous clan dignitaries who have fallen into inactivity. The only way to achieve this rank is if a rank higher than the Nox Assassino falls into what is defined as a period of prolonged inactivity.

Duties, Rights, and Powers of the Nox Assassino:

At first glance, the plethora of rules may be overwhelming, but we assure you they are easy to abide by, and are made to enhance the overall gaming experience of the clan as a whole. AoA prides itself as an easygoing clan, but does also take kindness and equality very seriously.

The Assassins' Citadel is available to all members of the clan who are paying for Jagex Membership, however there is a mandated 7 day probationary period enforced after joining the clan. During this probationary period, members may enter the Citadel, but not work at any of the skill plots.

All members are expected to cap at the Citadel if at all possible, however it is not mandated by a de-ranking.

Retrieved from "https://runescapeclans.fandom.com/wiki/Clan:The_Assassins_of_Asgarnia?oldid=77194"
Community content is available under CC-BY-SA unless otherwise noted.