Featured Clan [History]
April 27,2011
Many clans fail each year. This was not one of them.
In fact, this page was so well written, it had to be featured on the Main page.

Qualifications to join the order

Greetings to you friend.You wish to be a member of The Chosen Light eh? Well if you have the requirements listed down at the rules section, then you've come to the right place.

Members in this order are assigned to a house in either Falador or Lumbridge. If there are no more houses, they must share their house with another member. The Highlord and a select group of loyal men will stay at the White Knights Castle and the Regent Lord Repo and a maximum of 5 members will stay at Lumbridge Castle.

This Kingdom has been around since 2006 though not under King Kruzak.

Rains7 the first King of Falador hated the black knights and liked Falador and anything good, he noticed that no one started a Kingdom in Falador, so the was born.The Kingdom ran well under King Rains and with the continued raids and attacks on the black knights, they became rich.

The Kingdom soon reached its heigt of power as it soon acquired strong and decent men.It also aquired a new ally, The British Empire.Though both slowly declined.

With King Rains no longer in control of Falador, many members started to leave. Though Queen Stervex tried to keep the clan alive, all her efforts were all in vain.The Kingdom was destroyed and its people scattered.

A Highlord by the name of Kruzak5(Kruzak the 5th) started to find the refugees and survivors of the scattered Kingdom's remnants.

The Fall of the Silver orderEdit

absences of Highlord Kruzak5, many members left, leaving only 2 very loyal men in the order. During this stage, Varrock was taken with no resistance and the Lumbridge basement was their only base left. Kruzak5 heard of the terrible news and rushed as quickly as he could, but was too late.

Reformation of the fallen order under a new nameEdit

When Kruzak5 arrived, the clan was in ruins. Seeing his failure to guide his own brethren, he took the remaining members and gathered the others who left the order. Soon their allies, the Brothers of Justice helped them rise once more. After realizing his mistakes, Highlord Kruzak swore never to leave the clan for the sake of his brethren.

The order soon retook the entire Lumbridge from some noobs who went psycho. After that they sought to reclaim Falador by giving propaganda that the White knights and Temple knights are not what they seem to be.

These two groups of knights, knowing that they will be expelled out of Falador, decided to give the city to the Chosen Light. Knowing that their territory could easily be taken by unions and alliances, Kruzak5 and BoJ-Snowman who are close friends have agreed to make an alliance. Snowman and his order soon conquered Varrock, though they allowed Citizens to roam freely. Soon a clan red world, which was headed by Kruzak5's cousin,,joined forces with the 2, thus making their numbers bigger. Highlord Kruzak soon saw a failing order just like his former order. It was the Knights of Templar. Headed by ZombieDt-Slayer, the order took control of Edgeville and the Monastery. Kruzak seeing that the Templars would fall without any assitance decided to invite them to the Alliance. The Templars, being desperate, joined.

In July 5, 2011 King Kruzak had a visitor. Stervex, former leader of the KoF. Shocked by the news the king met with her. She describe that Falador was hers and her brothers first and that the king's is the new one. With the refugees having no homes the King invited her in the Kingdom and she will be queen. Unfortunately Stervex disappeared after a day in the kingdom.

Ever since Kruzak and others found out about the godwars dungeon, Kruzak had been interested in knowing what happened to the godwars. The king himself wanted to travel, but since he had deal with many problems he has to wait til the moment for answers has come

The Kingdom after 2 and a half weeks of peace, turmoil and corruption emerge in and out of the clan to break the peace of what the King has acheived.

Tensions rose between the two allies; The Chosen Light and the clan:Yeah beer grew, since the Chosen Light is against cheating(macroing) and Yeah beer is on cheating(macroing). The two clans soon clashed for a week.Eventually, no victor was declared but the two clans still remain hostile, though some of the clanmates of Yeah beer are still allies of the Highlord. The two leaders soon signed a truce, ending their rivalry.

The player mentioned above was accused of kicking another member when that player joined, fearing that his order would start a destruction inside out, Highlord Kruzak5 demoted Jakers to Private. But soon it was revealed that the player was just leaving the clan, so a furious Highlord kicked him out and banned him.Jakers was allowed to remain but there are some suspicions.

Highlord Kruzak knew that his clan wont last lnog without support from other clans and so will other clans. Though the clan failed to ally with the strong clans they were able to ally with clans that have the same goals or clans that were failing that needed KoF's help

A common goal and an alliance with the AoSEdit

Kruzak5 has been trying to know the whereabouts of the AoS. Inspired by their goals and rules, this is why the Chosen Light exists. At the late days of May,The Chosen Light was able to locate the AoS, Higlord Kruzak was pleased to know the news of the AoS existence.At the 1st of June, Lord Kruzak established contact with the AoS leader King Aeraes and agreed to be allies since both order share a common goal.

The Kingdom lacking members and an effective drill sergeant needed a clan police force that will fight for them.

They were soon in luck since 5steelsean found a suitable clan with common goals of the Kingdom. Led by The Durfell, Kruzak5 invited the clan to join their alliance in return giving 28% of the clan control of Falador.The clan accepted the terms and joined King Kruzak's alliance

April 2011- establishment of the silver order

April 31,2011- Merging of the silver order with Brothers of Justice (present clan name:sympathy)

Late May 2011- Brothers of Justice, Red world and Knigts of Templar join the Alliance

July 5, 2011- Remnants of the old join including there leader

Further news will be updated.

Mayor of Draynor- none

Governor of the Slums of Varrock- none

1.To destroy botters and macroers.

2.To encourage players not to cheat in-game.

4.To end discrimination in Runescape.

5.To help any new player with something he/she doesn't know.

2.NO Racism and/or Discrimination.

8.Be friendly to any neutral clan or union.

Note:The suspension will depend on how grave the offense is, the same goes to the first one.

2.Falador Any clan interested in buying the world 25 territories can buy it from Kruzak5

The previous ranking systems proved to be weak and let otheer people get away with things done wrong in the clan. The system has now been changed.

1. Stay in the clan for 3 days, and you will be promoted to corporal.

3. Setting up a successful event gains you 5 points, while 1 points is granted if your event didn't work out well.

4. Helping the leader will result to giving 3 points.

5. Doing good deeds, recruiting people and helping the clan be a better clan will earn you 1 point.

Corporal- Stay in clan for 3 days

"Great and Good are seldom the same man."

"Don't let the vision be clouded by evil, Look up for the truth coming from the skies."

"The currency of good is honour; it retains it's value through scarcity." 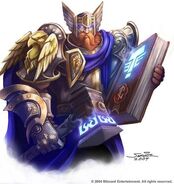 All hail the good Lord

Add a photo to this gallery

Retrieved from "https://runescapeclans.fandom.com/wiki/Clan:Sararmadyllian_Army?oldid=76609"
Community content is available under CC-BY-SA unless otherwise noted.