Featured Clan [History]
June 2011
Many clans fail each year. This was not one of them.
In fact, this page was so well written, it had to be featured on the Main page. 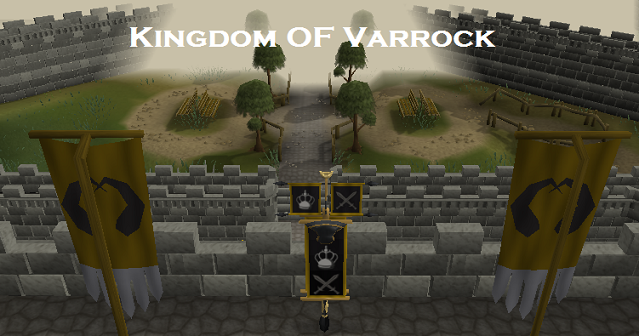 After applying for the Kingdom of Varrock, a member of the Royal Family will review your application as quickly as possible and once you are accepted you will need to contact an appropriate rank to be invited into the Clan Chat. From there joining one of our multiple subclans and putting in lots of hard work and dedication is the first step toward climbing the many ranks in the Kingdom of Varrock.

If you want to join, apply on our Recruitment Thread.

Please use the Table of Contents for a quick and easy way to navigate this page.

General news (Most Recent at Bottom)

Over the next few weeks, the Royal team shall be working on what we feel to be positive improvements for the Kingdom. Every once in a while, the pot simply needs to be stirred, in doing so, the contents get re-rearranged and hopefully a healthier broth is the result. What I’m saying is we are going to shake things up, make things different, and potentially give the Kingdom something new, or at least different. Some may not agree with certain changes, some may, and I’ll take this opportunity to say that all decisions are reversible.

Queen Aeraie would like to take this opportunity to announce that her weekly meetings will now switch off between 1PM EST and 6PM EST on a bi-weekly basis, in order to accommodate as many different timezones as possible.

The Royals have decided it is necessary to have what we are calling an “Event Reporting Thread”. This will be a thread in our private forums entirely for posting event attendance. Finding event reports on the Discussion thread has proven quite difficult by all parties that have held the Events Lord position, as well as anyone whom simply wanted to find the information in passing, this thread is to consolidate all this in one location, without needing to search. Please note that this thread is for Event Attendance ONLY, notice of a future planned event is not to be posted there. We ask everyone to help their fellow citizens by giving them a friendly reminder in-game if you see them post an attendance on the disc, as from now on only events posted on the correct forum will be tallied, and obviously some people will need to learn and adjust to the new version of event reporting (although it’s just posting it in one location opposed to another.)

I would like to once again remind everyone that the Kingdom of Varrock now has a Forum Roleplay thread, found here: 46-47-98-63768249 We ask that everyone sign up and give it a try.

I would like to remind anyone interested that the Queen and myself are still conducting interviews on two different Lord positions. The first is the recently vacated Minister of Foreign Affairs position, and the other is a newly designed position that will fill in on the duties of other Lords when they are on leave, or focus on recruitment if all are accounted for. Please contact Queen Aeraie or myself if you desire an interview, these will still be going on for two weeks.

We have had an unfortunate loss in the resignation of our Head Lady this week, Mistii, aka Alana Raven, whom needs to focus on some priorities in her personal life, and then will return to us roaring for action. For the time being the Royal staff has decided to fill in this particular role.

Our Lord of Edgeville, and War General, Slayaa, has also resigned due to personal reasons. The man the Royals have chosen to take his place has immense PvP experience, and we feel he brings a lot to the table in training others to meet that task. Among his resume is years spent among the RSB community, which you all may/should know is the largest warring community in Runescape. He has expressed interest in having KoV participate with that community, and thanks to his time spent with them, gives us a fair shot without being suspect to the downfalls that many people associate with that particular sector of the community. Without further adieu, I present General Will Atriax!

The newly vacated position of Elder of the Monastery already had a strong, dedicated person ready to take over the reigns. This man has been working side by side with Will to restructure and re-validate the MoV when they have up until recently been very lacking in both members and potential. Having already proven himself multiple times over, I am proud to present Elder Reyman922!

Over the past month, one citizen has proven themselves to be extremely dedicated to the cause of KoV. They have hosted a very large number of events, spent a lot of time teaching citizens to train a skill many don’t enjoy, and helped a sub-clan more than double their member count. As recognition for his hard work, the Crown recognizes Jag Atriax as Citizen of the Month!

Sub-Clan of the Month is awarded to the group which we feel has somehow shone forth brighter than any other over the course of the month. This month we have chosen a group we feel truly deserves this presentation. Coming back from the edge of obscurity, they have more than tripled their member count. They have been able to re-focus, re-structure, and re-educate citizens of KoV in Roleplay and bring interest back into the Gielinor pantheon. Obviously I am discussing the Monastery of Varrock! Congratulations!

As always, if you have any comments, questions, or concerns, feel free to contact me at any time and I will reply at my earliest convenience.

We do many events daily! Anyone can come to them. Here are some events that we do:

Our membership can be found in full here.

We value our allies highly and will help them in time as need as we are sure they would do for us.

The following is a list of territories currently under the control of the Kingdom of Varrock.

Edgeville
• Whole village
• Edgeville Dungeon
• Border is the wilderness ditch, alongside the monastry, to the edge of Barbarian Village.

Karamja
• Our central point of trade and main Navy base, we own everything North of Tai Bwo Wannai.
• Brimhaven
• Musa Point (Including Volcano and TzHaar)
• Ship Yard
• Tai Bwo Wannai

Subclans of the Kingdom of Varrock

The Kingdom of Varrock Guards

The Monastery of Varrock

The Ministry of Foreign Affairs

The Kingdom of Varrock's Ministry of Foreign Affairs pursue and maintain allied relations with groups associated with the Kingdom of Varrock. These fine Citizens keep in regular contact with allied leaders to ensure a steady stream of communication between our allies and our Monarch. Their aim is to foster these relationships in the hopes of building on and maintaining Runescape's inter-community network. If you are still interested in joining the Ministry of Foreign Affairs as a Liaison officer, please visit their thread in the public Runescape forums. You may find a link to this forum via the Kingdom of Varrock Directory, hosted inside our private forums.

The Kingdom of Varrock Dragon Guards is an elite combat-based subgroup, tasked with protecting the Royal Family in times of War. These experienced fighters, while ranging in combat experience, have one common goal – to be the best. If you are interested in being one of the elite in the Kingdom of Varrock, feel free to browse the Dragon Guard's thread in our private forums.

Queen Prbabygurl1's and King Worm Man 1's Coronation video is Copyrighted, Only use it in another page if you have permission from Emulated, If you do not, The video will be removed from your page. This video is owned by Emulated. This video can be move around on this page freely, but it is requested that it stays in the video section.

Retrieved from "https://runescapeclans.fandom.com/wiki/Clan:Kingdom_of_Varrock?oldid=76602"
Community content is available under CC-BY-SA unless otherwise noted.